When I was plannig my Korea trip, I read a lot of people advising to go to Jimjilbangs. A Jimjilbang is a Korean traditional bath-house/sauna that can be found widely across Seoul and other Korean cities (I read that the most famous and well-facilitated one in Seoul was Dragon Spa).

On my first day (more like night because I reached my hostel near Seoul Station only at 1:30am) in South Korea, it was freezing (5′ ) and I was definitely under-dressed compared to the locals. Was only wearing a thin jacket over a short sleeve shirt, with shorts. I was travelling with Hong Wei and his tolerance for the cold really sucks. He was shivering all the way from the train station to the hostel. The next morning, I woke up at 7:30am. Hong Wei was still sleeping so I went to have a jog around the neighbourhood for about 45 mins, which was when I realised that there’s a Jimjilbang just 2 minutes away. When I came back, he was still in bed. He was awake, but because of that ridiculous weather,  he didn’t want to get out of the blanket. Tsktsktsk. I told him that there’s a Sauna around the corner that we could visit, and I finally managed to get him out of bed.

Ok so I’ll summarise a few stuff that I got.

CHANGING AREA
This area is where everyone will be first directed to after they paid the entrance fee. It is filled with lockers for you to put all your belongings in. The people located in this area are in all stages of undress. Some stark naked, some only in underwear, some fully clothed. If you are visiting a Jimjilbang for the first time, don’t be shocked if the first thing you see after entering the first door they tell you to is naked people. Everyone there seems comfortable with it.

Lockers inside the changing area

SHOWER/SAUNA AREA
This area consists of showers, saunas, hot tubs, cold tubs, massage/feet reflexology area. Everyone inside had 0 piece of clothing on them. So the usual procedure (from what I observed) would probably be to take a shower, then dip into the hot/cold/medium tub whichever you prefer, then go to the sauna room (in Siloam there was 1 normal sauna and 1 with salt. Where they have this big barrel of salt for you to scrub your body with). No pictures for this area for obvious reasons.

ENTERTAINMENT AREA
This one consumed 2 floors in Siloam. It consists of the Gym, the PC room, Massage chairs, small arcade etc. (It really depends on how well-facilitated the Jimjilbang is.) 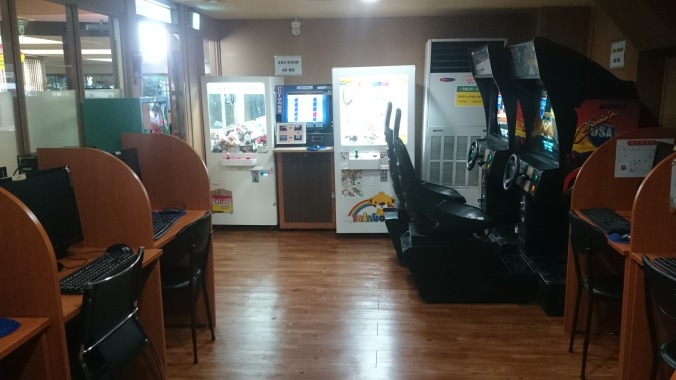 There’s even a small playground at Siloam. 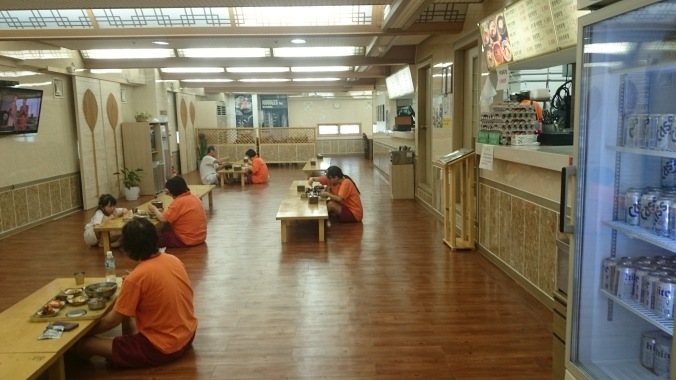 There’s also food if you’re hungry. You don’t have to carry cash. Just give the storekeeper your locker key (it is electronised) and they will only charge you when you leave the place

SPECIALISED ROOM AREAS
Now this area is really cool. Like literally, they have an ice room (It was -16’C at Siloam), a really hot room (The hottest in Siloam was 68’C if I’m not mistaken) and all kinds of other funny rooms. They are equipped with pebbles, salt, mud etc. In front of the rooms, there’s usually a short explanation of what each room does. E.g. The room of 68’C was filled with pebbles all over the floor. According to the description, it helps relieve stress and allow better blood circulation if you sleep in that room. 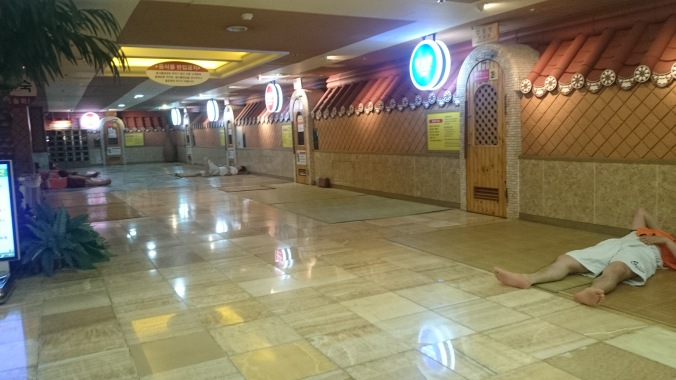 All the doors lead to these special rooms

I didn’t take pictures of the rest of the rooms.

SLEEPING AREA
There is a designated area for sleeping in the Jimjilbang (More like quiet area, because as you can see from the other photos, everyone sleeps everywhere.)

Sleeping area (I went at about noon. so it was empty. At night, this place is full.)

Now that I’ve explained the basic contents, now it’s time on how to use the whole Jimjilbang.
Ok that was a lie, because you can use it in any order you freely desire. Like you can stay there for 10 days and just keep using the facilities in any order. But I will tell you how I would recommend to use it.

Step 1: Pay the entrance fee, get your outfit and put your stuff in the locker
Step 1: Shower in the shower area
Step 2: Wear the given outfit and enjoy yourselves in the gym, the massage room, arcade, and the extremely hot rooms etc.
Step 3: Go to the Sauna, and then shower again, thoroughly. They have towels which you can use in the showers to scrub every nooks and crannies of your body so that it is crystal clean.
Step 4: You can either sleep there or leave the place.

Step 1 may seem unnecessary, but because we only get 1 set of outfit, and I assume that you’re not very clean when you enter the Jimjilbang (Because if you were, you wouldn’t have to visit a Bathhouse, which is what a Jimjilbang is.) So I want to make sure I can maintain the cleanliness of the outfit given for as long as possible.

It is possible to spend nights there for an alternative accomodation. I didn’t sleep over at Siloam because I already had a place to stay in. I stayed for 2 nights in a Jimjilbang in Andong, called Oncheon Spaland, for just 9k Won a night. Affordable and rejuvenating. All that spa stuff really relaxes you before you go to bed. Of course, if you don’t mind sleeping in a hall filled with 50 other Koreans and with a small pillow. Healthy for the body, and also for the wallet. Ka-ching.

You can also opt for a cheaper fee if you don’t plan on doing anything other than shower and use the sauna. At Oncheon, it was 6k Won without all the sleeping and all. So what happens is you will not get the outfit. And since all other areas except the shower and changing area requires you to wear the outfit, you can’t access them. So you only can use the locker to put your things in, shower, soak in hot water, and then leave the place.

N.B. I mentioned that the facilities in a Jimjilbang really depends on how “premium” the place is. So Siloam, which is near Seoul Station, is quite premium. It has a lot of facilities while Oncheon, only a 2-minute walk from Andong Station, is really poorly facilitated. No Gyms, the types of specialised rooms were limited and so forth. But it is still worth going because I enjoyed every second in there.